The best things about being pregnant... Now, if you've never had heartburn then you may leave, go on, off you go.

It's a singular experience. It begins with a vague uncomfortableness that grows and grows into a burning column of fire. Bending and lying down will often trigger it but so does eating and drinking. Now the 'professionals' will say there are only certain types of food that set heartburn off however, I can reliably inform you that water does the trick just as well as anything else. Although if I were you, I would steer clear of any and all pastry. I know.

But surely you can just take some medicine and all is well with the world, I hear you ask. Indeed, that is a pleasant theory. Four Rennies and eight dessertspoonfuls of Gaviscon later, heartburn is still kicking my oesophagus so I'm going to say no, not so much. And let's discuss this medicine. Rennies. Imagine eating minty chalk that dries your mouth out and leaves a nasty taste behind. Gaviscon. It's a thick, white liquid that is hard to swallow. I'll let you decide what it sounds like. But yes, you're right, it does come in mint flavour so really there's nothing to complain about, is there? And you can always wash it down with some water. Because that doesn't give you heartburn.

Cankles are a thing of beauty, aren't they? That wonderful feeling of having lost your ankle within swollen flesh and the odd pain that comes with it as you try your best to flex the hidden joint. Socks have become your enemy, they will leave deep slices in your flesh that don't fill out again for quite some time. And it's one of those odd things that you don't really notice as being all that uncomfortable until you take the sock off. And then you have to brazen it out, sitting with your deformed flesh on show. My favourite part is when you can't move your toes anymore because your foot is so swollen. I mean, we shouldn't grumble really. You don't get to see your feet that much during the later stages of pregnancy so at least when you do see them, they've made an effort. 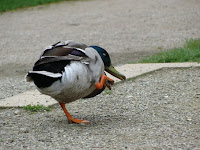 Is it a duck? Is it a goose? Is it someone who's ridden a horse forever? No - it's a pregnant woman trying to walk. It's like watching Mr Wobbly-Man move in a forward direction. I'm fairly certain the roiling gait does no favours to the swollen ankles and feet but at least it keeps the heartburn moving. I also love the way other members of the public don't move out of the pregnant woman's trajectory. I mean, of course, she can suck it in and, let's not forget, she's highly agile. Able to change direction at whim. Oh and, you don't need to get up to let her sit down. She's only walked a mile on swollen feet to pick up her other progeny from school. You know, that classroom you're sat outside of. Oh, your child is in year four, whose door is on the opposite side of the playground? How nice. So thoughtful.

Let's just say it's vast and has an impressive turn of speed.

I really think these are the creme de la creme aspects of being pregnant. I could go on about losing the ability to bend, but really, who needs that highly specialised motion in this day and age? As for getting in and out of bed well, some things should be kept private.
Posted by Claire Buss at 10:06:00 2 comments:

I am thrilled to announce the release of the new Sci-Fi Roundtable Anthology - The Quantum Soul - currently available on Amazon pre-order and due for release on 19th October. 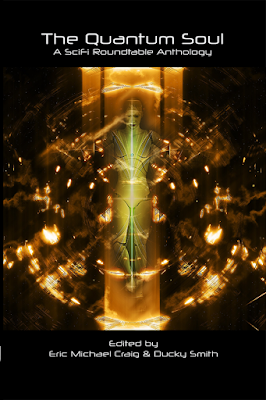 The reason I am so pleased about the release of this sci-fi anthology is not just because of the brilliant indie-writer talent it showcases, but because I am very fortunate to be one of the authors included in this book, with my short story 'Patient Data'. 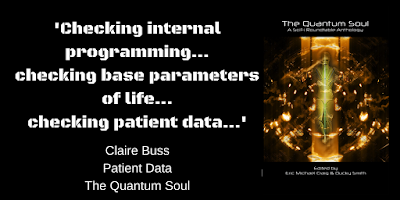 The Blurb
What is Life? Is it awareness of the ability to interact and understand the world around us? As we dig deeper into reality, what will we discover about ourselves and what it means to be alive? When we stare into the mirror, are we really sure that we see staring back is the only definition of life in the Universe?

Sixteen talented authors of The SciFi Roundtable each come up with their own unique answers to this challenging question. The Quantum Soul is a collection of short stories destined to leave you wondering if there isn't more that humanity has to learn about the ultimate meaning of life.


I hope this anthology captures your imagination, don't forget to let me know which story you enjoyed the most and to leave a review on Goodreads or Amazon - you'll have sixteen new best friends!

Tales from the Underground

I am very excited to announce the release of the new Inklings Press anthology - Tales from the Underground - currently available on Amazon pre-order and due for release on 6th October. 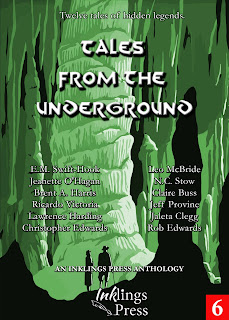 The reason I am so excited is not only that there are some fabulous indie authors included in this sci-fi & fantasy anthology but I am honoured to be one of them - my short story 'Underground Scratching' was selected to be part of the book.

The Blurb
Under our feet lie countless realms of possibility. Join twelve writers as they explore those realms - discovering lands of fantasy, lands from our far future, land of mystery.  There are places full of wonders, full of terrors, full of visions of what could be. Join us, down here, in the dark.


Watch the trailer here and let me know which tale gives you the biggest chill. Remember to leave a review once you've read the anthology, all twelve authors will love you forever.