It's a bit like free running but better because you don't have to physically hurl yourself over obstacles. Just mentally so you can repress.  It was also the exercise for this evening's writing workshop.   We had five minutes to just write with no thought or plan and to just stop when we ran out of words or we hit time.  I have since realised that free writing is how I do all my wordsmithing and is exactly how I wrote my novel. Yes, I really did have no idea what was going to happen.  Seeing as I have been doing some of the best procrastination of my life lately, I thought I would use tonight's free writing as my blog post and then feel inordinately pleased with myself for having blogged and written and attended a semi-social gathering with other, real life writers.  Here it is.

I really should be writing.  That is what I've been telling myself every single day for the past month. New Year - new beginnings and all that.  I wrote a book last year.  Yep.  Me.  A whole book.  Words and everything.  It has pace and drama and most crucially of all an ending.  I'm not good with endings.  They're too endy.  I like to keep my options open.  So back to my point.  Writing.  Daily. Because I want to be a writer.  Or I am one already.  I think.  But when I get to that teeny tiny window in my toddler focused day and exhaustion has clouded my brain function I say oh not tonight.  Tomorrow.  I'll do it tomorrow.  I'm better tomorrow.  Tomorrow is a golden place of awesomeness where everything gets done.

If you want to write you must read.  And so I push my tired eyeballs to try and make sense of the lines of regimented prose - at least half an hour before bed.  I read last night.  No idea what it was. Reading widely is supposed to improve my writerness.  But when its a toss up between the two?? I've only read 9 books so far this year.  I'm feeling the 75 book target breathing down my neck and it's only the end of January.  I've only written nothing.  Well.  Not nothing.  I wrote this.  I wrote Leo's thank you notes.  I finally finally wrote my query letter and actually sent it out to real agents with real email addresses.

There's a sequel to that novel you know.  Absolutely no idea what happens.  Few little bits here and there in the nooks and crannies of my brain.  But nothing on paper.  It's cooking I keep saying.  It's not ready yet.  I'll know the moment.  It'll be that day I start writing.  When I finally decide there isn't actually anything standing  in my way after all.  Because it can't be fear of failure.  I've already written one whole book.  And even if no-one else ever reads it - I did.  And it was good.  I'm not even sure I wrote it at all - I mean, I know I did but I think it was on some weird subconscious sleep deprived biscuit dipping lukewarm tea drinking level that is actually very hard to achieve.  It takes a lot of practice and biscuits.  And tea.  Which is why I'm always low on tea bags but never manage to drink a full cup.  It's something to do with being a creative person.  It's a thing.

Underneath my chest of drawers is a small space, ideal for gathering dust snakes and curiously fine wood shavings.  In this nook I keep my ROA - that's Record of Achievement for those unlucky ones who didn't receive a burgundy, hard backed, certificate holder on completion of their GCSEs - my husband's Harry Potter sticker books and a copy of Hello magazine celebrating the wedding of William & Kate.  It's the perfect hidey-hole for such things.  It also contains a blue folder and a black box file.

These two items sum up the entirety of my imagination.  Or at least the captured sparks that I managed to have a working pen and a piece of paper to hand for.  They are jam packed.  They are of course filled to the brim with excellent ideas.  And idiotic ones.  And ones that make absolutely no sense whatsoever.  Massive, world building, ten years to write the mythology behind them ideas. Short, often single word ideas dreamed up from a random article read or something overhead on a packed tube.  The time has come to look at them with real scrutiny and decide what has mileage. After all, I made the decision to 'be' a writer therefore I must actually write.

I have been writing in one form or another most of my life.  As a young sproglet my cheerful tale of Santa Claws had my parents guffawing for months - they still reference it with tears of laughter in their eyes.  I wrote about a magical land called Gon-Dor where teddy bears were trying to save the world.  That was before my immersion into Tolkein, I think.  Writing stories in school was always easy for me but I remember forgetting to do homework once and having to copy a passage from an obscure Enid Blyton.  My teacher said it lacked pretty much everything.  I think she knew.

Although my work world never involved writing actual stories, it did involve magazine article writing, copy writing for new services and a huge variety of sales material, website text, social media alerts and event blurb.  Perhaps that's why the urge to write was simmering on low and not bursting to be set free.  Cue motherhood and the ability to create a single coherent sentence went out the window.

But now I sit amidst toy trains and stuffed teddies in the splendour of toddlerdom and words begin trickling back.  As long as no-one interrupts me and I don't have to think about anything else at the same time.  Unless I'm finding it hard to concentrate and then an episode of the latest Netflicks whatever usually helps.  Which sound bizarre but it works.  Last year I wrote a book.  This year I have not.  I am sending out query letters to agents in the vain hope that someone else likes my book. So while I wait I need to start work on another project.

There is a scratching at the back of my head that keeps telling me - you should be writing.  I intend to try.  An hour a day.  Which means that I'll definitely have plenty of time to get through my Netflicks backlog.

The tale of the toddler in the night time

Once upon a time - or at least, about a year and a half ago last Wednesday - there was a little boy who would not, could not, sleep through the night in his own bed.

It started with crying at regular intervals in response to loud lorries thundering past, the demon children upstairs who ran, screamed and stomped with wild abandon at 11pm and the sibling with the permanent hacking cough of a octogenarian who smoked 100 a day their whole life.

Having been a stout supporter of at least two bottles of milk through the night the child knew comfort would come.  Having been conditioned to getting up several times a night from about 4 months pregnant the mother resigned herself to never, ever having a good night's sleep again.

At first a cuddle was all that was needed.  On extremely rare occasions the husband/father would rise from the sleeping dead and provide zombified succor but this happened once in a purple moon.  Blue moons are more common than you think.

The cuddle then became a rocking motion with an internal headcount, first to 50 and then to 100. Things got better for a while but as always, our tale takes a turn for the worst.

A period of illness led to continual wakings in the night and the requirement for longer cuddles.  In tired despair one night the mother brought the child back to her bed and they slept.  All was well. Rejoice, rejoice.

But it didn't last.  The toddler discovered that by sleeping in the big bed he could sleep with both parents and feel their warmth all night long.  He no longer needed a duvet, which he hated thoroughly and continually tried to kick off, as he could nestle in the middle of the two humps of parent.  A foot here, a hand there.  Practising his basic ninja octopus moves to perfection.

Night after night after night it continued until both parents had had enough of aching backs and sleepless nights and toddlers who stole all the duvet even though they weren't even under it!  The mother read articles and advice from all manner of 'experts' but nothing seemed to work.  The toddler would not sleep in his own bed in his own room.  He loved his mummy too much.

An inner voice would say to the mother - co-sleeping is fine, it's good for everyone, you'll get used to it, you see animals all heap together to sleep, its normal.  But it didn't stop the mother wishing for some comfortable space and a full night's sleep.

In the end grumpiness levels couldn't be sustained and so the toddler's bed was reinstalled in the parents room.  And he danced and danced with glee and spent happy moments climbing in and pretending to sleep.  It is here our tale ends as we do not know what will happen next.  Will the exhausted parents finally achieve a full night's sleep?  Will sleeping in the same room as his beloved mummy finally stop the toddlers panicked night time screams?  Let us hope we have a happily ever after. 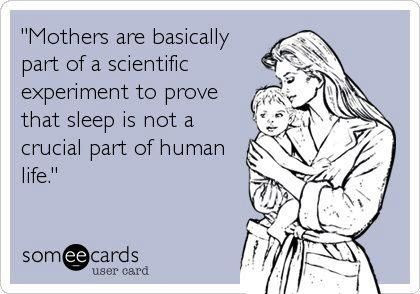