Last week I began a new adventure - cycling in the Greater London area.  All in all I managed to cycle 60 miles and make it to the end of the week.  This week will be the big challenge as I tackle 100 miles of perilous wheel spinning just to turn up for a job that causes my brain to curdle.  But enough about the job, lets look at my top ten highlights of cycling in London!

1. Cyclists are invisible to pedestrians

2. Most cyclists are colour blind and physically unable to stop at red lights

3. Everytime you pass a bus stopped in a bus stop it will indicate to pull out and start moving

5. Some bus drivers are incredibly considerate to the cyclist, others want to crush you beneath their wheels

6. That space that you think you can squeeze down - you can't.  Even though four other cyclists just squeezed past you to squeeze down the gap.

7. If you are inbetween a bus and a taxi, like the filling of a rather attractive sandwich (if I do say so myself) you will get squished unceremoniously.

8. When you are zipping along at a fantastic speed, 11 other cyclists will overtake you and vanish into the ether

10. The shiny blue painted cycle superhighway routes on the road get slippery when they are wet and cyclist suddenly disappear as they fall sideways causing brakes to squeal and gasps of 'are you alright?'

But the biggest realisation I have made is that cycling hurts your butt.  Alot.  And the exquisite pain as you get 'back in the saddle' is unlike any torture previously devised by man.  I thought my large derriere would be sufficient padding.  Oh how I was wrong. 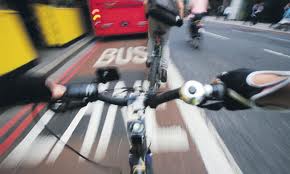