Writers Workshop #5 'You talkin' to me?'

It's all about the dialogue.  When you think about it, dialogue is all a book consists of.  There are the conversations between the characters and the conversation from the writer talking to their reader.  I am dialoguing with you right now.

Why do we like dialogue so much?  Well, it helps the writer tell their story, it breaks up the exposition and helps speed up the text - a vital tool in the creation of literary illusion.

So what do we need to avoid?  ADVERBS!!

Don't write verbatim even though people speak with ummms and errrs, it's boring and unless they are significant character traits vital to the plot they are unnecessary.  Don't state the obvious or repeat what has been described in the preceding text.  Don't use your dialogue as a wikipedia info dump - yes, of course two characters talking to each other is a great way of introducing new information or explaining about something but it shouldn't be written as a two page monologue.  The reader will get bored and quite frankly, the speaker has probably asphyxiated due to lack of breath.  At the same time don't make your dialogue a zippy tennis match between your characters - no-one talks like that. People emote, they fidget, their attention becomes distracted, that wacky thing called life continues to cycle on regardless in the background.  It's got to be believable and readable.  Which means a 6-way character conversation will be almost as difficult to read as it is to write.  Even with highly defined characters and differentiated speech patterns it's hard to tell who is who.

Good dialogue has lots of conflict.  Each character speaking wants something specific and different from the conversation.  The use of contractions lends a natural flow to your dialogue - don't instead of do not, can't instead of cannot.  Unless of course your character talks extrememly properly and correctly - in writing, there is always an unless.  Good dialogue takes into account that people generally talk differently depending on whom they are with - we don't talk to our boss the same we talk to our mates or indeed our lovers.  Hopefully.  Otherwise it would get very confusing.  Unless your boss is your only friend and lover in which case you probably need to get out more.

Great ways to tell your characters apart include the use of slang, stutters, accents, word choice and word order but for goodness sake be consistent and allow your character to grow verbally with their story and plot timeline.  Your dialogue needs to match the time period you're writing in.  I'm fairly certain the Elizabethans didn't call each other cray cray.

Another annoying thing to bear in mind is that people don't always say what they mean.  They lie, they hide their feelings, they flatter to get somewhere and they often have an ulterior motive.  Don't believe me - analyse the conversations you had this week.  Were you completely honest and truthful in everything you said to absolutely everyone.  So why should your characters be such unnatural paragons of virtue.  We're supposed to find them believable.  Sometimes the best dialogue is what isn't spoken.  Which brings me to thoughts.  If you're writing first person perspective, it's likely that you will have thought dialogue.  Any other point of view and it's just confusing, especially when you have a cast of characters and your story is told from different angles.

Finally, remember - you hear and know the meaning to your story, dialogue and characters in your head but the reader doesn't have your inside knowledge so you have to work hard to convey that meaning.  Yes, that's right - work hard. 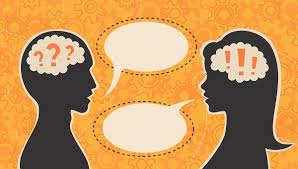 We've all got some kind of association with plays.  For some of us it means painful association with hot stuffy classrooms and Shakespeare being beaten to death by a teacher who doesn't care and a class who wouldn't know an iambic pentameter if it hit them in the face.  Then there are those lucky ones who enjoyed Ibsen's A Dolls House - mostly due to the excellent local production - which encouraged them to attend the local summer Shakespeare plays, to see that Pratchett book to play adaptation and save up for a few special trips to musical theatre.

If nothing else there is a very good chance that as a small child you were taken to see your local panto and you stood proudly at the back of the stage as a banker/penguin with an unexpected duet as the old woman who feeds the birds in your primary school's production of Mary Poppins. Theatre is very much a part of British life and really it's our choice as adults whether or not we continue that love affair with the stage.  I'm ashamed to admit that I have not been as nurturing to that part of my younger life as I could have been and so it was with great joy that I signed up for a local playwriting course.

In learning my craft as a writer I must say yes to everything and I'm so very glad that I did.  Whilst only a short four session course, at the end of our brief time together I will have produced a monologue for the Pen to Print, Real People - Real Stories video booth and a 10 minute play that I have written will be put on by real actors for real people to watch.  How exciting is that???  I'll admit that when I heard that was the desired outcome, a real thrill went through me at the thought of someone speaking my lines.  And to think, playwriting wasn't something I had really thought about yet in my brief writing career.

And so to learning.  What makes a play a play?  You need a story with a theme - a beginning, middle and an end with some kind of conflict your main character(s) has to resolve.  So far so same as writing a book. You will need Acts and Scenes and a certain style of delivery.  Right... chapters and genre?  You need strong characters, dramatic tension, subtext, a great hook at the beginning, an interesting concept and a fantastic finale.  Easy really.  I don't know why we don't all write plays instead of books.......

But really, writing is writing.  If you want to be a writer then you need to be writing and maybe the format that suits your creativity best is a novel but maybe it's a play.  How will you know if you don't have a go?  The exercise for the week is to take five minutes and write an opening scene between two characters.  See what happens.  If it flows then just go with it and write a play.  If you struggle with the format yet the idea is brilliant then you have your next book - what's to lose?

I need to go and wrestle with my inner monologue now, ready for the next session.  Or rather I need to go find out exactly what one is - it's like making a souffle, I'm pretty sure I know what I need to do but it's probably a good idea to find a recipe and read through a few different methods before I actually have a go.   I shall leave you with my opening scene - be gentle dear readers.

Scene: A small flat.  Jack is searching for something.  Ned is standing by the door.

Jack: (shouts from off stage) Did you do the dooflop?
Ned: I can't hear you.

Jack returns to the stage.

Jack: Did you turn off everything?  And set the timer for that recording?  And tell Mrs Johnson to come and water the plants?
Ned: Yes dear.
Jack.  OK.  I think we're ready to go.  Have you got everything?  Keys?  Wallet?  Phone?
Ned: Yes.
Jack: Let's go then.
Ned: I just need a quick wee.

Ned returns to the stage.  Both exit through the door.

I'll admit it has been a little quiet on the blog front but there has been some furious writing behind closed doors.

The Gaia Effect
The agent who had the full manuscript said................no.  There was a small amount of feedback. Nothing I didn't already know.  Without being completely defeatist and highly self critical there are serious issues.  I have realised, almost a year since writing the book, that there are no descriptions of people or places.  How did that happen?  Because I know what they look like and I know what the city layout is but I have neglected to tell the reader.  The story is dialogue driven which means I can see the characters talking in my head but I have not written that action into the dialogue so it can seem a little flat in places.  I do not have a main protagonist, I have a group of main characters on a journey together so there are multiple perspectives.  These are confusing because my characters aren't highly defined.  This is because I know what they look like, I know their different personality traits but I haven't infused my prose with their little quirks and speech individuality.  This may look like an awful lot of work.  It is.  But then this is my first book and I'm learning.  And it should be a lot of work.  Writing is tough.  So it's editing, editing, editing, refining, refining, refining, improving, improving, improving.  And then I'll be taking the self publishing deal that came with second place in the competition.  My Nan wants to read it so I've got to get on with it.


2016 Pen to Print Competition
Neither of my entries made it through.  Which was disappointing.  To my mind Thursday's Child lacks a historical perspective so I need to read more books set in the 1920-1940s and figure out how to write a sense of time period.  A Pint of Milk and A Stabbing dances around the harsh reality of the witnessed crime.  It needs to get grittier.  There is work to be done.


New work
Book Club - a semi autobiographical look at how important my book club has been to me.  With 5000 words so far it has really captured my imagination.  I also look at it being an opportunity to interview my fellow book clubbers - if they are willing - giving me some experience in talking to others and telling their stories.

Short Story Challenge
After being inspired by writers workshop I've decided to push myself to putting together a short story collection.  I have my headings so I will be writing one a week until I run out of titles on the list. Bodies in the Graveyard has been written.  Next up - Lunch on Venus.


I now have the beginnings of four books.  The poetry book is still dangling over the abyss of self publishing.  There will be a short story collection.  I am going to a playwriting workshop in a couple of weeks so there should be more exciting avenues to explore.  It's happening - slowly - but it's happening.